I am pleased to share with you the second round of talks and performances from the sixth annual TEDxToronto conference. Let them inspire you and your work!

Sabrina Jalees: How Living More Honestly Leads to a Better Life
Throughout history, comedians have used humor to shed light on subjects that are typically considered to be uncomfortable or taboo. In this TEDxTalk, comedian Sabrina Jalees approaches topics like racism and sexuality as she tells a coming-of-age story laced with hilarity. After working up the courage to tell her Muslim family that she was a lesbian, Sabrina learned that being true to herself and taking pride in her individuality would not only enhance her material as a comedian, but that ultimately it would lead to a happier life.

John Cruickshank: Why We Can’t Afford to Disengage from the News
In an era when social media and online publications are a primary source of news for so many, one might wonder if there is still a place for the newspaper amidst all the noise. In this TEDxTalk, John Cruickshank urges that traditional news sources must quickly find a way to re-engage younger populations to continue breeding an engaged society of socially and politically active citizens. He draws strong parallels between declining interest in the news and the decrease in political participation amongst young people, and offers suggestions as to how we might break this cycle. Read an excerpt from John’s talk here in the Toronto Star.

Adam van Koeverden: The Pursuable Prime
Olympic athletes spend much of their youth training to become world champions. But what happens once suddenly you’ve achieved those goals, and after twenty years of pursuing your sport you no longer have the same stamina you once did? In this TEDxTalk, Olympic gold medalist and world champion sprint kayaker Adam van Koeverden discusses the key factors that motivated him to succeed from a young age, and reflects on the impact that those lessons have had on his more recent years in kayaking. How can athletes continue to participate in their sport beyond their physical prime and what can we learn from them? 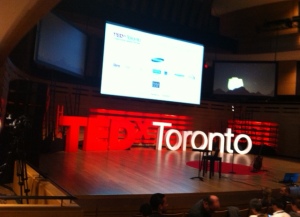 On October 2, seventeen of Toronto’s greatest thinkers and changemakers joined together onstage at TEDxToronto to deliver powerful talks and performances that embodied the theme of “Relentless Pursuits”. I would like to take this opportunity to share 4 of the talks with you now (the other 4 will be posted next Wednesday). They are sure to inspire you and your work.

Keith Vanderlinde: The Edge of the Universe From the Ends of the Earth
From dark days to lethal frigid temperatures, one might wonder where lies the appeal of visiting the South Pole. Cosmologist Keith Vandelinde provides insight into such a journey, as he discusses the experience of living in this part of the world for six months in the pursuit of scientific discovery and tells us about the birth of the universe. In this TEDxToronto talk, Keith shares his stories and astonishing images of the South Pole and reminds us that our universe is only one of many — and that secrets to the past can often be found by examining the skies overhead.

Nav Bhatia: Changing Perceptions: From Sikh to Superfan
Toronto has been named the most multicultural city in the world, yet many of the immigrants to the city still encounter racism long after they’ve arrived. Nav Bhatia moved to Toronto in the 1984, and after overcoming significant prejudice and obstacles as a Sikh, today he boasts successful business enterprises and the coveted title of “Superfan” of the Toronto Raptors. The message in Nav’s TEDxToronto talk is one of hope and inspiration, as he urges us all to use our passions to rise above discrimination to allows us to excel both as individuals and as a city.

Rachel Parent: Why You Have the Right to Know What’s in Your Food
At a time when environmental factors are contributing so significantly to the agriculture industry, many farmers and corporations are turning to the use of GMOs (Genetically Modified Organisms) and pesticides to sustain their crops. Fifteen-year-old activist Rachel Parent believes that the use of these chemicals is negatively affecting our health, and that consumers have a right to know when they’ve been used to modify ingredients in the food we’re buying on a daily basis. In her informative TEDxToronto talk, Rachel urges Canadian officials to make it mandatory for food manufacturers to list the use of GMOs in labelling, so we can make informed decisions as consumers.

Jamil Jivani: Racial Profiling Hurts Everyone, Including the Police
Police forces around the world have often been criticized for racial profiling and for acting with unnecessary force. After being a victim of racial profiling himself, activist Jami Jivani wanted to change the way that the police engage with local citizens. In his TEDxToronto talk, Jamil discusses the importance of mediating the relationship between the police and the public. Though there may be fundamental flaws in the system, Jamil believes that by developing a dialogues with police officials, we can initiate positive change.